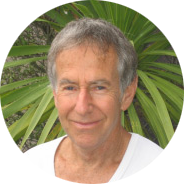 John started his practice in Nelson in December 1994. He treats many kinds of conditions including digestive, respiratory, dermatological, gynaecological, emotional, musculo-skeletal, spinal etc. He is available at Being The Centre for Natural Health, Monday to Friday from 8am to 7pm.

While ESL teaching in Thailand John consulted a TCM (Traditional Chinese Medicine) doctor for a stubborn skin condition that had plagued him for years. Dermatologists had only prescribed steroid creams suppressing symptoms but not preventing progression of the condition, and with side effects from long term use.

After many questions about eating, sleeping, digestion, etc. as well as tongue and pulse diagnosis, the doctor diagnosed his condition as caused by “excess blood heat” and the treatment should be to “cool the blood”, none of which meant anything to John. He treated him firstly with acupuncture. The first change was that John’s nose bleeds, daily since age 5 stopped, never to bother him again. It was only then that John told him about the nose bleeds, and that they had stopped. He explained that this was also a symptom of excess blood heat. Gradually the psoriasis started to clear, and then the doctor added Chinese herbs to the treatment, a mixture that had to be boiled up, and the black strong tasting liquid drunk twice daily. The skin did clear more quickly, although taking a year to clear completely. John started asking questions, his treatments becoming lessons in TCM. After finishing the treatment John continued studying, spending every weekend for the next year with him. Although enjoying the job he had and not looking for a change, John realised that TCM could benefit the whole world. Deciding to take it up himself, on the doctor’s advice, he studied Mandarin for two years before going to Shandong University of TCM for six and a half years. In April 2012 John was appointed guest professor of Shandong Academy of Medical Sciences, a research and teaching institution affiliated to Shandong University of Traditional Chinese Medicine. He was subsequently invited to go to China in November of the same year to give a series of lectures in China on Chinese Medicine as practised in New Zealand.